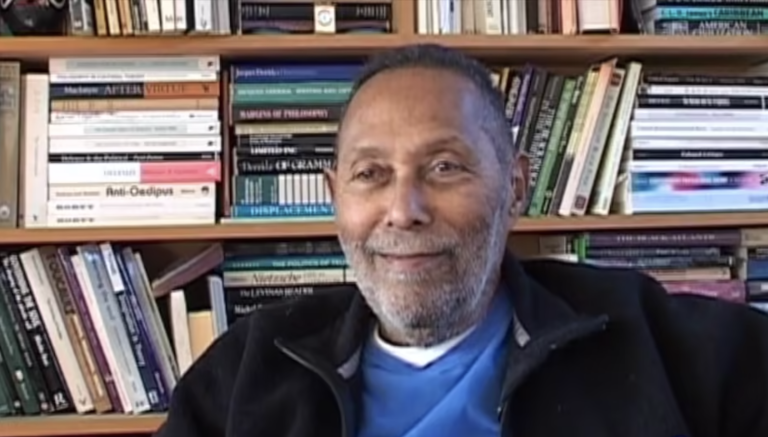 This conversation with cultural theorist and professor Stuart Hall was pre-recorded with David A. Bailey and presented as the keynote address for the Black Diaspora Visual Art symposium held in Barbados on the 13 & 14 February 2009.

As part of the planned events marking the Abolition of the Trans-Atlantic Slave Trade, the National Art Gallery Committee in Barbados invited Bailey MBE to organise a series of symposiums and exhibitions that explore visual art in the Black Diaspora. A number of leading scholars, curators and artists who have made key contributions in this area were invited to Barbados to participate in a dialogue with the local/regional Caribbean community. It was envisioned that this event would provide an opportunity for the Barbados art community and wider local audience to participate in the discussions and present contemporary Barbadian art and artists to a panel of distinguished experts in related fields.

This conversation with Stuart Hall was a feature presentation during the 2nd Symposium, which took as its starting point the question Hall poses in his essay called Modernity and its Others: Three “Moments” in the Post–War History of the Black Diaspora Arts. The essay offers an analysis of three ‘moments’ in the post-war black visual arts in the UK. The main contrast identified is between the ‘problem space’ of the artists–the last ‘colonials’–who came to London after World War II to join the modern avant-garde and who were anti-colonial, cosmopolitan and modernist in outlook, and that of the second generation–the first ‘post-colonials’–who were born in Britain, pioneered the Black Art Movement and the creative explosion of the 1980s, and who were anti-racist, culturally relativist and identity-driven. In the work of the former, abstraction predominated; the work of the latter was politically polemical and collage-based, subsequently embracing the figural and the more subjective strategy of ‘putting the self in the frame’. This generational shift is mapped here in relation to wider socio-political and cultural developments, including the growth of indigenous racism, the new social movements, especially anti-racist, feminist and identity politics, and the theoretical ‘revolutions’ associated with them. The contemporary moment – less politicised, and artistically neo-conceptual, multi-media and installation-based– is discussed more briefly.

The symposium set out to explore some of these themes in Hall’s paper with particular reference to their applicability to the contemporary Caribbean context and the relationship of the contemporary moment to earlier developments.