In the Studio with Djofray Makumbu - Guest Projects Digital Residency 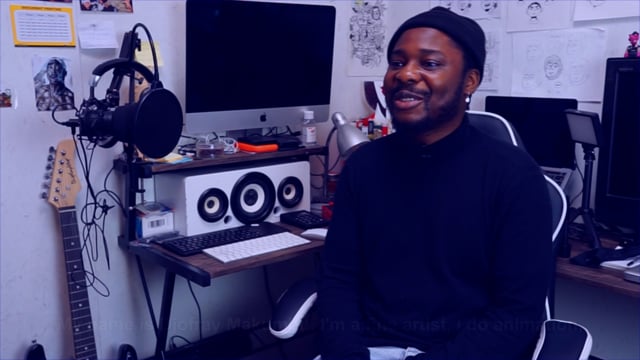 ICF has partnered with Guest Projects on their 2021 digital residency programme supporting creative practitioners from Africa and its diaspora. One of the selected artists-in-residence is Djofray Makumbu, who speaks about his practice, growing up in London and some of the challenges he faced as a result of having dyslexia in this film commissioned specially for #GuestProjectsDigital.

Djofray Makumbu is a British Congolese artist born and based in East London. He often works with friends and family when making his work which draws on his personal experiences and that of the people close to him. Recent works have focused on the shame and stigma of mental health difficulties, the pressures and violence of inner-city life from the perspective of young people and the joy of music and dancing. Makumbu loves to mix up different techniques combining stop motion animation, video footage, hand-drawn and painted elements in moving image sometimes presented alongside live performances such as dance or scripted scenes. Each element in the work is carefully self-made from hand-built sets and hand-stitched garments for Claymation characters set to soundtracks that are developed closely with Makumbu’s brother.

In 2020, Djofray won a Goldsmiths Exhibitions Hub commission, in partnership with the London Community Video Archive, to make Hello Mr Officer, a moving image work that sees young Black men from across London share their experiences of being harassed by the police. The work uses stop motion, watercolour and rotoscope alongside archive material from The People’s Account (1987) by Ceddo Film Collective held in the LCVA archive. The work is due to be exhibited in Summer 2021. Recent solo shows include Brixton Library, London in 2019.

Djofray graduated from the BA Fine Art programme at Goldsmiths University in 2018 and was awarded the Alumno/SPACE Studio Bursary as a result of his degree show exhibition.