I am a heart beating in the world 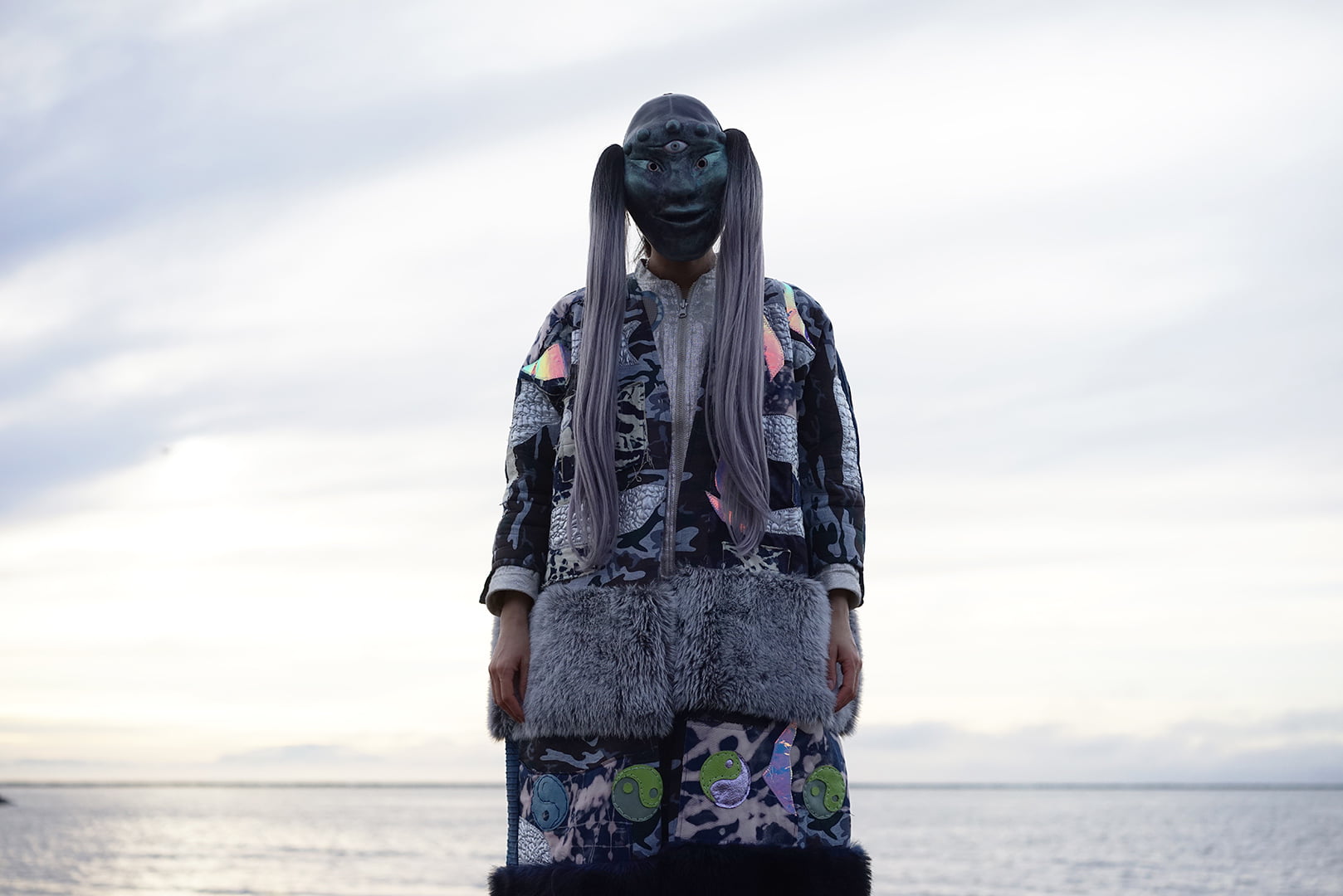 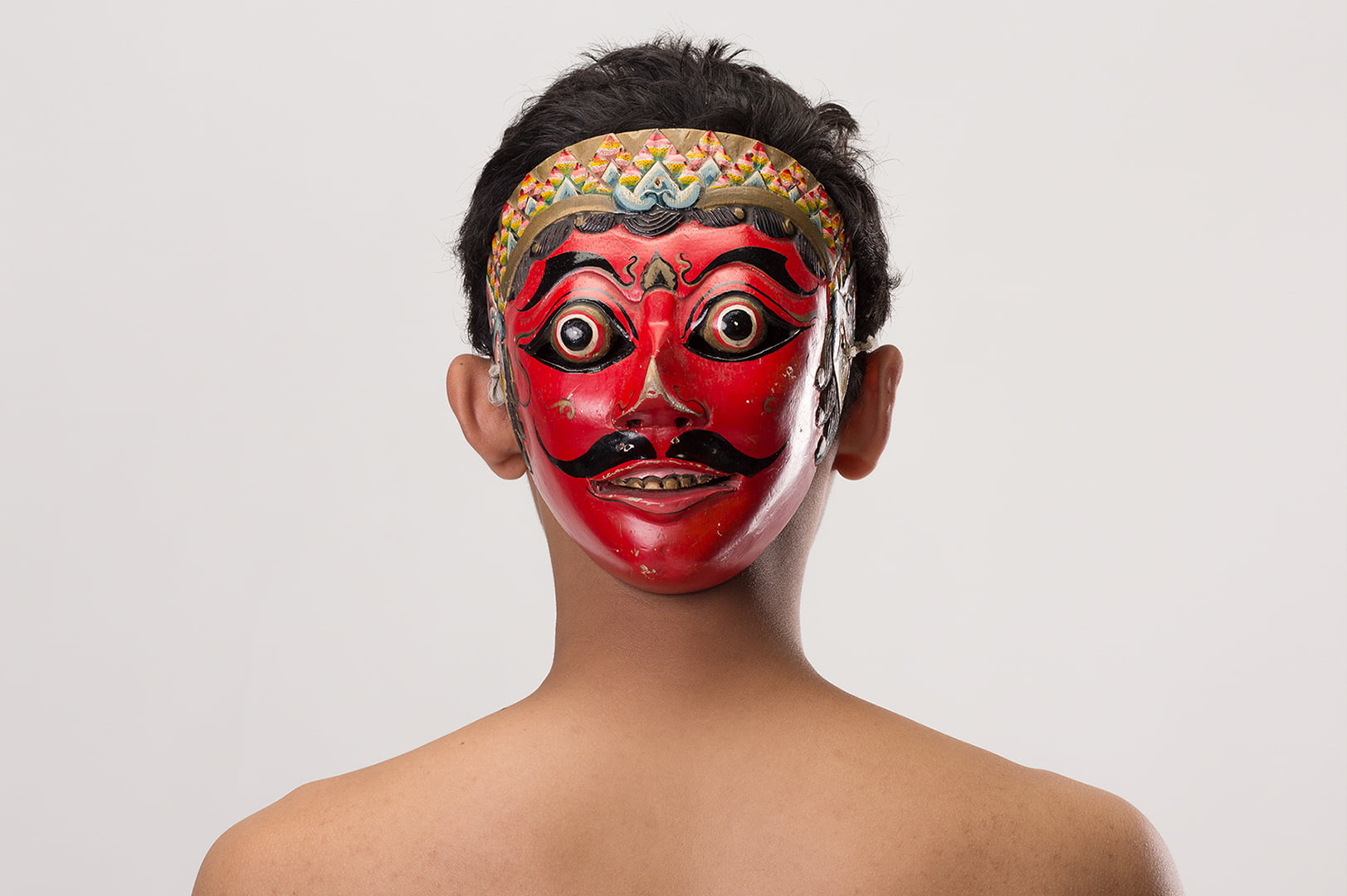 International Curators Forum and 4A Centre for Contemporary Asian Art in partnership with Campbelltown Arts Centre present ‘I am a heart beating in the world: Diaspora Pavilion 2, Sydney’ – an exhibition which considers the navigations, imaginings and lived experiences of six artists based in Australia, the UK and the Caribbean: Abdul-Rahman Abdullah, Kashif Nadim Chaudry, Lindy Lee, Leyla Stevens, Zadie Xa and Daniela Yohannes.

Curated by Adelaide Bannerman, Mikala Tai and Jessica Taylor, the exhibition will take place on the land of the Dharawal people at Campbelltown Arts Centre in Western Sydney, Australia from 22 May to 10 October 2021.

‘I am a heart beating in the world’ is the first of a series of peripatetic, international events set to take place in Sydney, London, Venice and online culminating in the International Curators Forum’s Diaspora Pavilion 2 project, presented in collaboration with 4A Centre for Contemporary Asian Art. Diaspora Pavilion 2 interrogates and complicates the term diaspora across various curatorial formats as part of an ongoing mapping of the rich and complex material cultures, mythologies, alternative histories and re-imagined landscapes that are born from the distinct and yet shared reality of belonging to a diaspora.

‘I am a heart beating in the world’ considers how the artists connections to ancestral homes are maintained and re-imagined through memories, myths and traditions. In the exhibition Lindy Lee explores the feelings of absence in the diaspora in the works Fire in the Immanence of Unfolding (2020), Fire and Dew (2020), and Quiescent Mind (2020), and engages family photographs in Birth and Death (2002) and Twinning through jade bamboo (2015). Daniela Yohannes also incorporates family photos into her collages, a series of self-truths (2018), and offers a meditation on our relationships to ‘homelands’ in the film Atopias: I Have Left that Dark Cave Forever, My Body has Blended with Hers (2020). Leyla Stevens’ photographic diptych, Safe Passage (2013) and film, Our Sea is Always Hungry (2018) interrogate what is seen and unseen in the Balinese landscape.

Abdul-Rahman Abdullah exhibits two new sculptures, Buraq (2020) and Throne Room (2021), alongside Merantau (2016), all of which connect in different ways to his ancestry in South Sulawesi, Indonesia. Kashif Nadim Chaudry presents two sculptures, Hareem (2010) and Cabal (2020), which consider the cultural and social forces that inform his experiences as a gay man of Pakistani heritage in the UK. Zadie Xa’s large tapestry works A Pilgrimage 2 Family Through the Portal of a Green Ghost and its counterpart A Pilgrimage 2 Family Through the Portal of a Blue Ghost (2019) and film installation Child of Magohalmi and the Echoes of Creation (2019) imagine new worlds informed by Korean creation myths.

Understanding diaspora as a distinct, sometimes provisional experience nuanced economically, historically and regionally ‘I am a heart beating in the world’ is as much an exhibition as it is a research project, underpinned by fieldwork and reviews of how artists, curators, theorists and institutions engage with diaspora as a topic. 4A’s biannual 4A Curators Intensive will be held alongside the exhibition, bringing together early-career Australian and UK-based curators in a week-long professional development programme. The intensive will be facilitated in a hybrid format through workshops, lectures, site visits and discussions.

Watch video interviews between the exhibiting artists & the curators 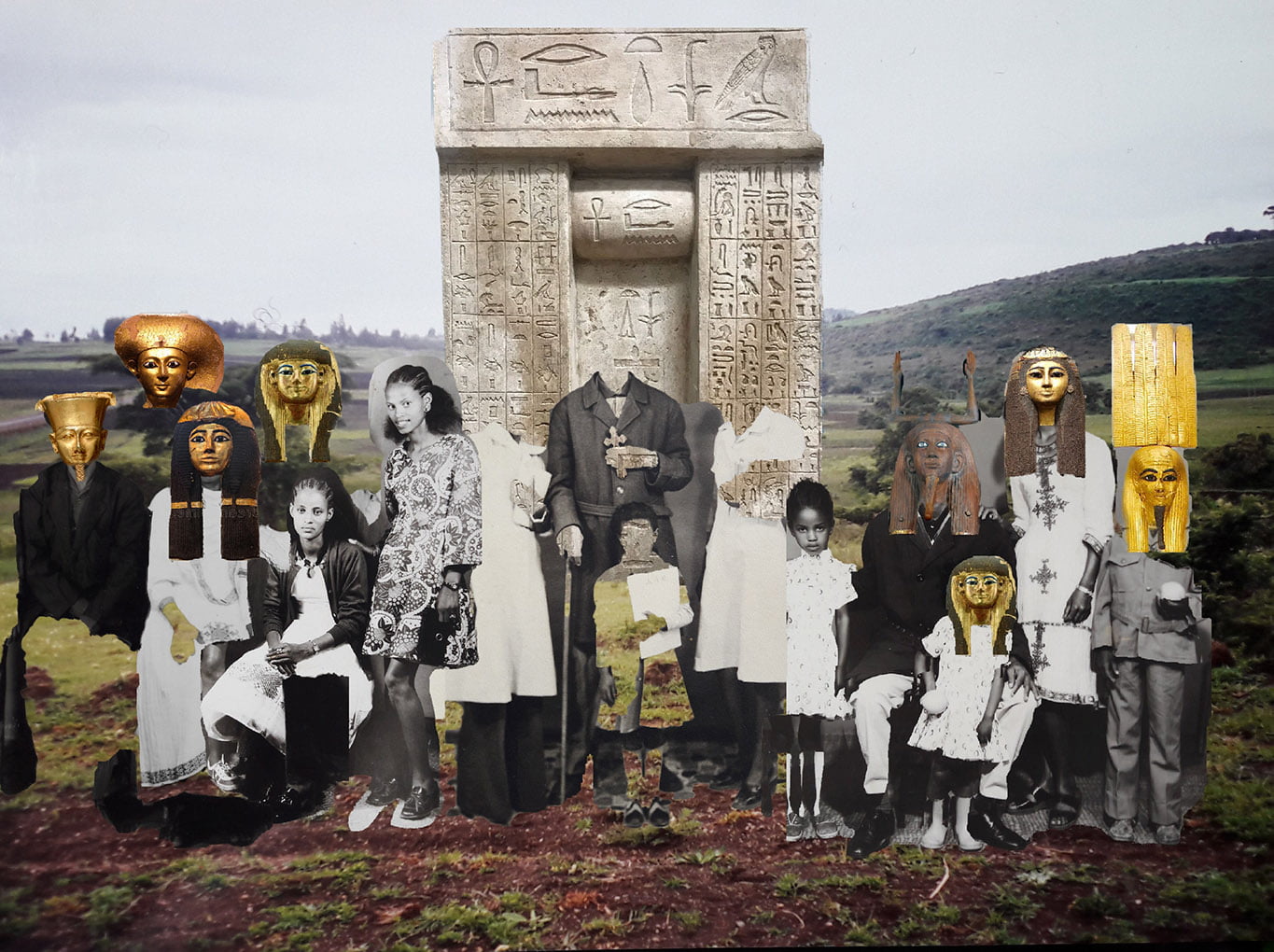 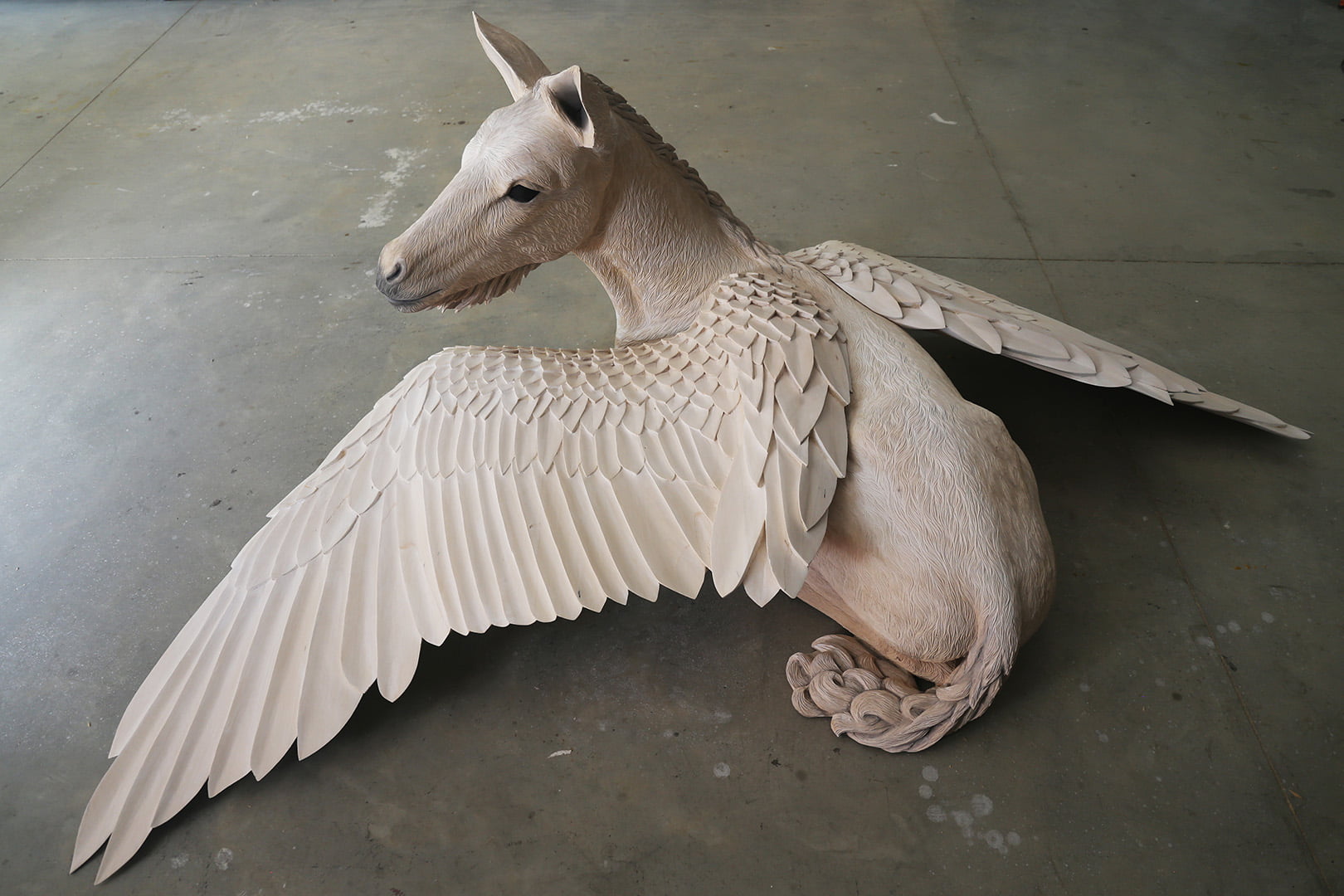 Abdul-Rahman Abdullah (b. Port Kembla, Australia 1977 lives and works in Perth, Australia) is a sculptor whose practice explores the different ways that memory can inhabit and emerge from familial spaces. Drawing on the narrative capacity of animal archetypes, crafted objects and the human presence, Abdullah aims to articulate physical dialogues between the natural world, politics and the agency of culture. Recent exhibitions include The National, Museum of Contemporary Art, Sydney, Australia (2019), Dark Horizons, Pataka Art + Museum, Wellington, Aotearoa New Zealand (2017) and Magic Object, Adelaide Biennale of Australian Art, Adelaide, Australia (2016).

Kashif Nadim Chaudry (b. Nottingham, United Kingdom 1976 lives and works in Nottingham, United Kingdom) is informed by his family heritage in tailoring which has influenced and focused his practice around the importance of materiality and craftsmanship. His work is characterised by the working, shaping and moulding of physical objects through the use of elaborate textile-based techniques to create monumental installations from fabric and found objects. Negotiating his identity as a British born gay man of Pakistani Muslim heritage much of Chaudry’s work questions how people choose to position themselves in the world. In relation, it is increasingly the sculptural and three-dimensional possibilities within his work that address the idea of positioning power, the sacred and the ceremonial. Recent exhibitions include What is Home at National Trust Croome Court, Worcester (2019), The Three Graces, Turner Contemporary, Margate, UK (2016) and Swags & Tails as part of the Asia Triennial, Manchester, UK (2014).

Lindy Lee (b. Brisbane, Australia 1954 lives and works in Byron Bay, Australia) has an expansive practice that explores her Chinese ancestry through Taoism and Ch’an (Zen) Buddhism – philosophies that see humanity and nature as inextricably linked. Symbolic gestures and processes that call on the element of chance are often used to produce a galaxy of images that embody the intimate connections between human existence and the cosmos. Rather than singular visual statements, they are thoughtful objects where meaning emerges from sustained meditation. Notable exhibitions include: the major survey exhibition Lindy Lee: Moon in a Dew Drop, Museum of Contemporary Art (2020-2021); the group exhibition Divided Worlds: Adelaide Biennial of Australian Art, Art Gallery of South Australia, Adelaide, Australia (2018); and Lindy Lee: The Dark of Absolute Freedom, The University of Queensland Art Museum, Brisbane, Australia (2014).

Zadie Xa (b. Vancouver on unceded Musqueam, Squamish and Tsleil-Waututh territory 1983, lives and works in London, UK.) produces work informed by her experiences within the Korean diaspora, as well as the environmental and cultural context of the Pacific Northwest. Forces of distance and relation—familial, cultural, spiritual—shape her constantly evolving notions of self. Her work often features garments, including cloaks and masks, used for performance, protection or ceremony. Xa’s practice is highly collaborative, and she has developed ongoing exchanges with dancers, musicians and actors. Since 2006, Xa has worked closely with artist Benito Mayor Vallejo. Recent solo projects include, Moon Poetics 4 Courageous Earth Critters and Dangerous Day Dreamers, Remai Modern, Treaty 6 Territory and the Homeland of Métis, Saskatoon Canada (2020-21), Child of Magohalmi and the Echoes of Creation, De La Warr Pavilion, Bexhill-on-Sea, UK (2020), Art Night London 2019 and Meetings on Art performance program for the 58th Venice Biennale 2019. Xa was one of the recipients of the Sobey Art Award in 2020, which for the first time was awarded to all 25 nominees.

Daniela Yohannes (b. 1982, lives and works in Guadeloupe in the French Caribbean) uses her own Ethiopian-Eritrean heritage as a lens in her work to reflect upon the racialised movement and conditional belonging of African diaspora. Through abstract portraiture and storytelling across multiple media, Yohannes explores the overlap of individual and collective subconscious and desire, and the destruction caused by displacement. Her work dwells on alternative Black realities, considering the bonds between herself, her family and other communities through magical symbolism. By embracing forms of hybridity and considering the artefacts of diaspora as a means of travel in themselves, she has built a dedicated interdimensional machine from emotionally charged objects.

International Curators Forum (ICF) was founded by artists and curators in 2007 to offer a dynamic and evolving programme that responds to the conditions and contexts impacting creative practitioners through commissions, exhibitions, projects, publications and events. We provide tools and platforms for professional development and facilitate an open peer-to-peer network inviting participants to be part of a generative system of skills and knowledge transfer. Across all of our work, both critically and practically, we aim to challenge the barriers to equality and inclusivity within our industry.

Through all aspects of our programme we engage with diaspora as a critical framework through which we can address and complicate public discussion, test and explore new innovative curatorial models, and create space for artistic and discursive interventions into historical narratives and systems of representation. Based in London, ICF has conceived and produced projects with artists, curators and thinkers who engage with diaspora across the UK, Europe, the Caribbean, Asia, the Middle East, and now Australia.

4A Centre for Contemporary Asian Art (4A) is an independent not-for-profit organisation based in Sydney, Australia. 4A fosters excellence and innovation in contemporary culture through the commissioning, presentation, documentation and research of contemporary art. Our program is presented throughout Australia and Asia , where we ensure that contemporary art plays a central role in understanding and developing the dynamic relationship between Australia and the wider Asian region.

4A’s activities facilitate cultural dialogue between Australia and Asia in the belief that Asian cultural thinking significantly shapes the world today and will have an important impact on the future. In Australia we showcase stories, present a multiplicity of perspectives, and explore contemporary concerns and ideas that influence how we, as a nation, engage with Asia. We have a particular focus on art that addresses Asian-Australian experiences and the contributions that diverse Asian migration has made ⎯ and continues to make ⎯ in shaping Australia. 4A’s focus in Asia is to promote the breadth of Australian artistic talent, seeking to build an image of Australia that is open, progressive and fundamentally connected with our Asian neighbours.

4A has been a leader in Asian contemporary art in Australia since 1996. In the decades since, we have established a highly respected reputation among artists and audiences, and within an expanding network of international art institution peers. Our long history and ongoing work across Asia is recognised as having raised awareness of Asian-Australian art and culture we continue to celebrate Australia’s diverse cultural heritage and growing links throughout the wider Asian region.

Located on the edge of Sydney, Campbelltown Arts Centre (C-A-C) is in a unique position to forge collaborative exchanges between artists, disciplines and communities through the creation of new curatorial situations and challenging streams of practice.
Using the edge as a starting point, Campbelltown Arts Centre creates a secure platform for communities and artists to take risks, challenge perceptions, confront issues and raise questions through the commissioning of new works. These new works invite collaboration, partnership, local, national and international dialogue, the juxtaposition of new and traditional techniques and cross-disciplinary approaches. Contemporary artists are at the forefront of Campbelltown Arts Centre’s programming and through consultation with communities, we deliver a program that profiles contemporary visual arts, performance, dance, music, live art and emergent practices.