Stephen: The Murder that Changed a Nation
Discussion & Screening Event

ICF presented a screening and discussion event at Birmingham City University to commemorate the 20th anniversary of the publication of the Stephen Lawrence Inquiry (The Macpherson Report) of 1999, following the racist murder of Stephen Lawrence and the initial failed police investigation.

The event was curated by Ian Sergeant (curator and PhD researcher) as part of a larger ICF project inspired by Professor Stuart Hall, that explores ideas of race and cultural representation as articulated in and developed since the Macpherson Report through visual arts practices and discourse.

Presented in partnership with the Stephen Lawrence Research Centre in Leicester, this event aimed to raise awareness of Stephen’s death and the repercussions of the Macpherson report in shedding light on the police force and other public institutions labelled as ‘institutionally racist.’ The discussion also related to the current wider issue of knife crime and the focus on black youth as the main culprits of carrying out such attacks, which has been recently questioned by evidence produced by the Guardian columnist, Gary Younge.

The Macpherson Report identified the issue of ‘institutionalised racism’ within the Metropolitan Police force and within other such public and private institutions, suggesting institutional racism can be determined through “… [the] collective failure of an organisation to provide appropriate and professional service to people because of their colour, culture, or ethnic origin. It can be seen or detected in processes, attitudes and behaviour which amount to discrimination through unwitting prejudice, ignorance, thoughtlessness, and racist stereotyping which disadvantage minority ethnic people.” [Macpherson of Cluny, William, Sir; The Stephen Lawrence Inquiry: report of an inquiry by Sir William Macpherson of Cluny. Home Office, London: Stationery Office, 1999]

About the curator: Ian Sergeant has a MA in Contemporary Curatorial Practice from the School of Art, Birmingham City University. Recently curated exhibitions include Reimaging Donald Rodney, exploring the digital embodiment and rich legacy of the late Black British artist Donald Rodney. He is a director of performing and visual arts organisation Kalaboration, artist led exhibition space Ort Gallery. He is a PhD research student at Birmingham City University, his practice-led research is focused on the Visual Representations and Cultural (Re)Constructions of Black British Masculinity in 21st Century Birmingham. 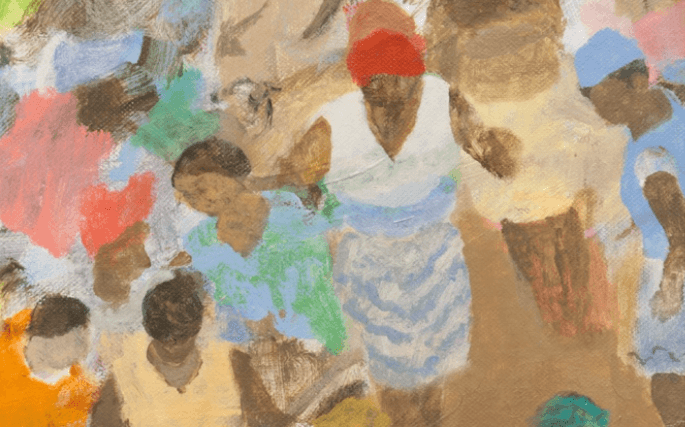 Paul Dash in Conversation with David A. Bailey

On 14 March 2019, ICF’s Creative Director David A Bailey was in conversation with artist Paul Dash at 198 Contemporary to discuss Dash’s solo exhibition at the gallery. Not many artists wait until their 70’s for their first solo show, which demonstrates that Dash has not has the attention that his work merits. 198 Contemporary seeks to redress this by presenting Lifeline: A Retrospective of works by Paul Dash, which opened on 1 March. Lifeline was the first major solo exhibition by Dash and for the first time, brought together works from throughout his career, spanning the 1960’s to present day. The collection of works presented include figurative and semi-abstract large-scale paintings, and a selection of ink drawings focusing on several themes drawing on his Caribbean heritage such as carnival. Dash’s more recent work confronts the reality of the current refugee crisis in a series of sensitive pieces in ink, water colour and collage.

A member of the Windrush Generation, Dash migrated from Barbados to Oxfordshire in 1957 at the age of 11. After completing his foundation course at Oxford Polytechnic, he moved to London to study painting at Chelsea School of Art. However, he explains, his figurative approach caused some concern: “Staff a Chelsea didn’t take kindly to my love of more traditional figurative art-making practices… in the second year whilst painting a complex carnival piece, a member of staff stood behind me and pointedly said ‘figurative art is dead, it went out with Cezanne.’ When he left the room, I turned the picture upside down and painting an abstract over it. That was the beginning of my period in the wilderness as a creative being.”

Dash spent the majority of his professional career as an educator in arts and multicultural education, most notably as a lecturer and senior lecturer at Goldsmiths University for 20 years. Describing his journey as an artist, Dash says “It was some twelve years later whilst teaching at Haggerston Girls School in Hackney, that I painted the self-portrait showing in this exhibition. That was the start of a four decades’ crawl from the bleak shadows in which I subsided to a firmer connection with the lifeline that has given my life meaning. At times that line has shown signs of wear of threatened to break but it has held firm and enabled me to build a life of purpose, meaning and hope for the future through my ongoing art practice.”

When describing his work Dash identifies his painting practice as a ‘lifeline’ which brought him salvation through hardships in his experience as a person of the Windrush generation.

A video of the conversation can be found here.

Abbas Zahedi
‘MANNA from below’

MANNA from below is a lecture performance series by Abbas Zahedi, which was initiated at ICF’s Diaspora Pavilion in Venice in 2017. Zahedi has since adapted the work into various formats and it continues to evolve in response to different exhibition and performance commissions. In March 2019 ICF invited Abbas to present an iteration of the MANNA from below lecture performance at the Royal Academy in London as part of the Outset Contemporary Art Fund Partners Grants Announcement, where ICF was awarded a grant for the development and delivery of the Diaspora Pavilion 2 programme between 2019 and 2021.