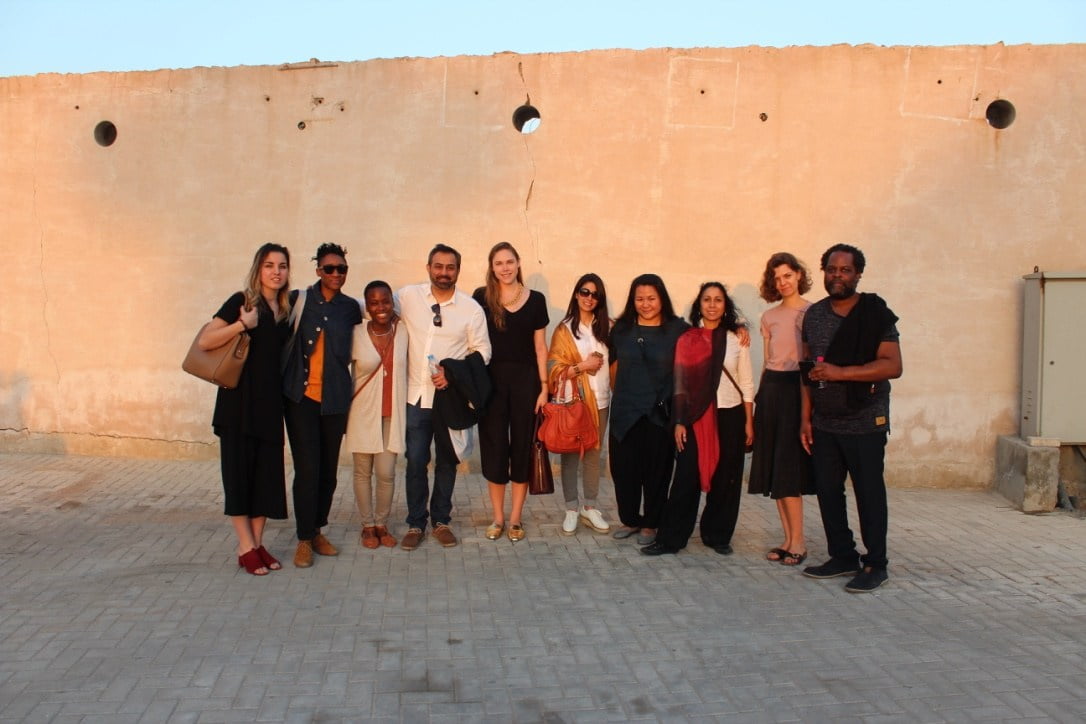 Curating the International Diaspora and Beyond the Frame: Sharjah

Curating the International Diaspora is a project that involves working with curators and artists from culturally diverse backgrounds across five countries between March 2016 and March 2017. By attending and participating in events in London, the Caribbean, Sharjah during the Sharjah Biennial and Gwangju during the Gwangju Biennial, a group of arts practitioners were able to experience and engage with some of most relevant projects and professionals addressing contemporary art and curatorial practice, and to network with a global artistic community, thus offering exceptional opportunities for professional development.

Curating The International Diaspora was an integrated 24-month programme that builds upon ICF’s expansive existing international networks, cultural partnerships and expertise. The project established new knowledge in the relationship between the study of cultural diasporas and contemporary curating, made possible by a programme of focused public events to be held in the UK, the UAE region, South Korea and the Caribbean between 2016 and 2017.

Curating The International Diaspora saw the development of different programmes at each site that took the shape of public conferences and programmes, exhibition and biennial tours, workshops and studio visits with artists to collectively explore three themes:

After attending the Sharjah Art Foundation’s 2016 March Meeting and exploring the arts landscape in Barbados and Martinique, to build upon the discourse produced during the Curating the International Diaspora symposia in London and Gwangju, the project participants from South Korea travelled to Sharjah for the 2017 Biennial as the last stage of the year-long project. They were joined by the Beyond the Frame cohort, thus facilitating a network of exchange between two of ICF’s most ambitious curatorial programmes.

Sharjah Biennial 13 featured over fifty international artists and involved an ambitious opening programme of performances and lectures by practitioners such as Cooking Sections and Raqs Media Collective, that the group were able to attend. In addition to the Biennial, the group was given a tour of the exhibition Ahmed Morsi: A Dialogic Imagination at the Sharjah Art Museum by the artist and curator Salah Hassan, and met with the team at the Maraya Art Centre.

On the evening of 27 February 2017, the cosy and lamp-lit Academician’s Room at the Royal Academy of Art, London, was filled with people from the Caribbean, particularly Barbados, for the first UK performance event by Barbadian artist Sheena Rose: ‘Island and Monster.’

Rose materialized quietly at one side of the room, dressed in a black patterned lace-knit body suit with garlands of flowers at the shoulders. People gradually fell silent, assuming the role of audience in anticipation of performance. She started to address the room, in a very direct and personal way, talking about her own thoughts, difficulties, pain, uncertainty, dilemmas and questions. Her narrative addressed the decisions of her life – where to work; how to deal with location; identity; how to relate to her heritage; how to relate to the art world; questioning the nature and focus of her work. She explained much about both the island and the monster, delivering a very honest, revealing and provocative insight into her situation as a young female artist from the Caribbean;

Immediately this performance raised questions of conduct for the audience; how to behave when another human being is laying her soul bare, whilst engagingly but scantily dressed in carnival style? Do we look her in the eye, say ‘hello’, respond to her questions, deal with her accusations, try to help – or do we subscribe to the conventions of theatre and insert an imaginary proscenium arch between ourselves and the performer?

In the later discussion with Jessica Taylor, of organiser ICF|International Curators’ Forum, Rose cited earlier street performances she had made in Barbados, which had elicited straightforward bawdy criticisms of her approach and her underwear. Barbados is used to body-led street performance; the Academician’s Room is not. Rose is still exploring and developing her practice, using a range of media including performance, which itself has quite recently been reclaimed/rediscovered by the visual art world and is still beating the bounds of its own conventions. Rose will probably further this debate in future work and refine/develop her decisions about and management of the performer/audience interface.

In ‘Island and Monster’ she addressed the issue of the gaze in one particularly sensitive way, placing toy makers’ ‘googly eyes’ from the haberdashery counter in her triumphant crown of hair. Hair styling is huge in the Caribbean, but it is entirely to be looked at; definitely not touched, and Rose’s decorative eyes comment on this. In his magnificent 2009 documentary ‘Good Hair’ Chris Rock explores the wonders of African-American women’s hairstyling. He films a group of elderly black men in a barber shop reflecting “Oh man, don’t touch de hair – man, never ever touch de hair…..”

Additionally, the use of the Academician’s Room itself formed a major element of the piece. A room where ‘art world insiders’ meet and chat in an intimate setting was temporarily taken over by a shared expose and lament about the situation of a working artist. Similarly, Rose’s barely-there but beautiful costume, and its exhibition of her body in a public context, perhaps raised other issues about sexuality and the art world. To what extent does a young woman’s attractiveness detract from her being taken seriously as an artist – and to what extent within the art world milieu is she still eye candy for older (and more powerful) generations? And what about the inevitable role of ageing?

Rose’s performance demonstrated great courage, focus and sincerity. In common with much contemporary work, it inevitably raised issues of context and reference. It is likely that most of Rose’s RA audience were already familiar with her work, but how accessible would this piece have been to someone without this background knowledge? The ‘after-chat’ helped a lot in this regard, but there remain issues about content and completeness that could perhaps strengthen future performance work from this artist.

Rose’s recent drawings – shown as part of the after-chat – use the economy and accuracy of graphic narrative media (e.g. cartoons) to communicate complex and personal issues with great accuracy. Her self-portrait, the head surrounded by tiny aeroplanes, entirely reflects the situation of growing up on a tiny island but gaining awareness and ambition to play a serious part in an international professional community.  This autobiographical approach is the core strength of Rose’s work. She is to be congratulated on her steadfastness and commitment in navigating a very personal route through the shark-infested waters beyond the reef that encircles and protects her tiny home island.