ICF partnered with TrAIN (Research Centre for Transnational Art, Identity and Nation) to present the London iteration of Curating the International Diaspora programme on 16 June 2016 at Chelsea College of Art. This symposium was the first of four international programmes held in the UK, the UAE, South Korea and the Caribbean to investigate how emergent cultural diaspora have impacted the curatorship of contemporary visual arts specifically and how new models of contemporary curating have developed as a consequence of these effect. The project demonstrated how curatorial practice has been radically transformed by the diaspora of people, intellectuals, artists and cultural workers.

More than any other field of enquiry, contemporary art curatorship has felt the impact of diasporas. Since the late 1980s, contemporary curating has moved from being primarily associated with museum and exhibition display to a practice understood as the organisation, framing and circulation of ideas around global cultural production, its mediation and its dissemination. During this time, the world has experienced an increased movement of languages, cultures and identities. For intellectual and cultural diasporas from diverse origins and disciplines, a new kind of curatorial practice has attempted to represent these changes by creating what Ute Meta Bauer has called ‘a space of refuge – an in-between space of transition and of diasporic passage’ for cultural workers across the world.

During the past two decades there has not only been a proliferation of large-scale global exhibitions, but an exponential rise in trans-national curatorial projects taking diaspora as both their main focus and dominant theme. Since 1989, all large-scale global exhibitions in some way or another, from the first truly global exhibition ‘Les Magiciens de la Terre’ (1989) to Documenta 11 (2002), to the 11th International Istanbul Bienal (2009) have all engaged with and contributed to a widening of the issues as to how to present diverse cultural diasporas, and how their accompanying new networks of cultural co-operation have contributed to post-colonial models of curatorial practice that have explored beyond previously-established Western centres of artistic production. 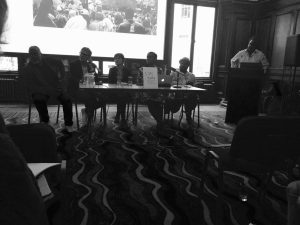 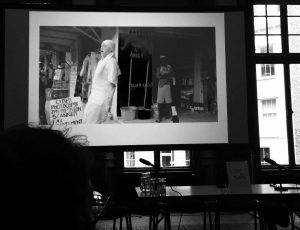 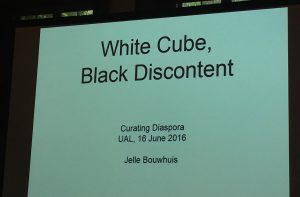